Earthworks: an exhibition of ceramic vessels by Peter Wilson 1995

EARTHWORKS: An Exhibition by Peter Wilson 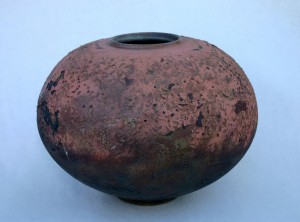 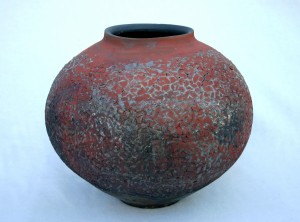 Exhibition Essay: Fire and Earth from the Belly of a Pot-Maker
Every day of my life
I shave the beard from my chin
Suppress the natural man,
Do my bit in the strife
To keep original sin
At much at bay as I can [1]

The first human burials mark the beginning of ritual. Our social, religious and everyday material culture is immersed in ritual, some deliberate and sacred; others seemingly a part of an unconsciousness of daily, temporal pattern. These can be perceived as reference points or invisible, kinetic structures that are like the fine, intricate and laborious task of the arachnid spinning its web. They maintain a level of inner harmony that meshes us within the interconnectedness of the great cosmos. This is the action- movement – energy that holds life together in the shadow of death.
The creating of Peter Wilson’s recent ceramic vessels requires an intense and lengthy ritual that determinedly reaches beyond daily habit and social conformity. In his book, Looking at the Overlooked, [2] Norman Bryson evokes those images known as Imagines which were described by the teacher Philostratus, when attempting to develop in his students, an understanding of semantic structure within aesthetic form. They were to imagine certain pictures that may or may not have been virtual fragments of the decorative schemes of the Roman country villas in Boscoreale and Herculaneum. These didactic devices constituted what we might call a Still Life image and were called Xenia; the contents of which were stuff of daily acts of survival.
The images of leaves, luscious figs, oozing honey and plump chestnuts described by in Xenia I ‘expresses relations of pre-cultural harmony between men and nature and between individuals’ [3] . The Xenia II images of the hare hanging on the withered oak tree, raised bread seasoned with fennel, parsley and poppy seed in a deep basket and new wine and pressed grapes, ‘explore the threshold between nature and culture’ [4]. It is here in the second style that the processes of a universal material culture link all humankind and call for the sacred and secular vessel. The milk and the honey are contained, stored and put to fire in the vessel. The timeless narrative of what were rituals of survival and celebration are told in the form of the ubiquitous ceramic vessel; a manifestation of labour and the elemental powers of fire and earth. 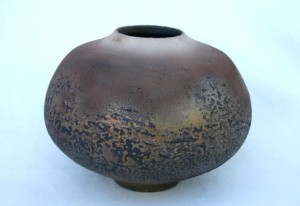 Wilson’s pure forms take on the traditional nuancing of curvilinear geometry as he is impelled to produce and shape this circle of human unconscious. There is no gimmickry in his artistry for his pots are branching blooms from his crafting of simple utilitarian ceramic ware; the essential nature of which is mass production for consumption. This is evidence of the sorcerer and master in one. It is therefore natural that these pots, which are evocative of the earth’s crust, are an extension of this artist- creature’s body and energy but will offer a sameness that is never repeated. Yes, the sameness is a pattern as is made by the spinning circling of planets of our galaxy.
This medieval, artist- geologist, who brings fire and earth together, conjures the manifestation of his personal paradigm. This is one of mastery, control and knowledge fitting snugly into the physical presence of wonderment that derives from the many fires and layerings of his raku process.
The encrusted surfaces of scared, scorched scabs have a tri-unity. Firstly, the primitive intuition of the expressionist abstractions, secondly, the classical ideal of monumental strength produced by long term acquirement of knowledge and skill and finally, in the words of the pot-maker himself, ‘The interrelationship between form, colour and surface texture with the raku process and its accidental occurrences provides many elements for the artist to manipulate towards the development of idiosyncratic works” [5].
Wilson’s pots are also vessels that manifest the consciousness of a reality that addresses a cultural displacement to the antipodes, but also suggests a metaphor that speaks of the thin, delicate shell – -so fragile – dichotomising the strength of an ancient culture, whose physicality is prevalent in the tensile structures that Wilson evolves out of his dual relationship with this arcane, hostile and delicate territory and the clay that he pushes with alacrity into plastic form. He inherits the materiality of his European culture, embracing the ancient land through a blending of surface texture, lengthy process that is foreign to modern life styles, and the comfortably thrown forms that also exude a sense of being “happily thrown”. As artiste and maitre of clay form, he defies extraneous hampering.
You are the vessel full of holy oil
Wisdom, unstirring in its liquid sleep
Hoarded and cool, lucid and golden green,
Fills the pure flanks of the containing stone;
Here darkness mellows what the sunlit soil
To purposes unknown, for and unseen
Produced, and labour of unnumbered man,
All the unthinking earth with fret or toil,
Reared, ripened, buried in the earth again,
Here lives, and living, waits: this source
Alone
Distils those fruitful tears the Muses
Weep. [6]

Wilson’s studio and surrounds are littered with hoarded and un-stirring pots that could be discarded or just sitting and being. Like the vessels of the source in Hope’s poem these talismans of time would seem to be braziers of holy oil, which exude intoxicating smoke that invokes magic rites. They could also be tomb models just as were the Haniwa of an older Japan wherein model figures, animals, bowls and platters were buried aside the dead; holding a sacred rather than secular function. These already-old rotund shells have been given such a delicately-harsh treatment by Wilson, that they appear to be decorated with deliberate perforation and the subtle, subdued colour that transmogrifies into what could be mistaken for a material of ancient cast bronze. This litter is one and the same as the “rhyparos” [7], of the ancient world, which in turn becomes the discarded material of human civilisations. 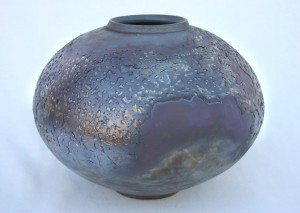 Meteorite Series                                                                                     Meteorite Series 2
It will in turn and time become the bearer of secrets of eras gone by – from the table to the temple to the tomb  – that are suffocated by the hot ash of earth’s anger. Herein, the small wares and trivial objects that pertain to rhyparos, share the artistry and crafting of those genres that omit the human figure graphic, but to those who perceive beyond the merely visual, here lies on the ground, all of the human story and more.
These vessels could be from anywhere and any time; existing at a temple, a table, a tip or a contemporary building. Whilst this form is an austere aesthetic that becomes a circular verse of poetic charm, it encloses the mysterious expanses of the Australian continental centre, the warmth of an inner glow transmutes from the cavernous hollows that these cremated exteriors serve to support.
The bronze-like cauldrons are following in a line of braziers which are inherited from a past epoch. These fossils contain within them the alchemical elements of darkness and light, day and night. Here are vessels that grew out of necessity and the hands of the early farmer, who tilled the earth and who saved the seed and preserved life for a time. There is a long inheritance of cultural value that is placed in these vessels which are also in this very instance stones and lamps.
The earliest pottery vessels have come from Japan as does the raku process of pot making. Twelve thousand years ago these were round as are these recent vessels which inherit this unconscious circle. This unselfconscious form is universal and at the same time breathes this pot-maker’s personal idiom.
William S. Wilson III encapsulates the pot maker’s performance and production in his writing, Art: Energy and Attention, wherein he discusses the difficulties that arose in understanding the new art of the post war era in the west, “When an artist sees bits of information become energy, and sees himself as energy that can be transformed into the forms of energy, then he can see the work of art as the outward and visible sign of the inward and spiritual energy” . [8]