See below link to film trailer: Marfa Texas: The Hairy Man from the East – made 2012.

I have been shortlisted for the 2019 Len Fox Painting Award at the Castlemaine Art Museum in Victoria. Out of 190 entries, 50 were selected. My entry is “Exotica in Her Finery at the Lake.”

I am taking part in a group exhibition, to be held as the inaugural show at “The Village” art and crafts space in Port Kembla. My work will be a selection from the series: Industrial Bodies: Port Kembla  and Glimpses of Lake Illawarra. [2017 – 18] 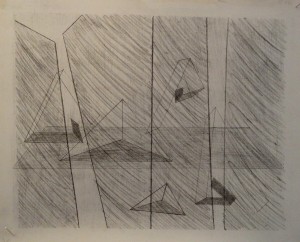 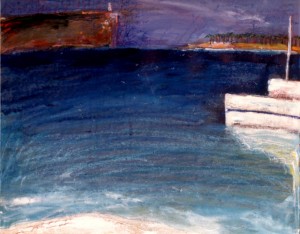 Jewels in Memory of Louise Moillon 1993 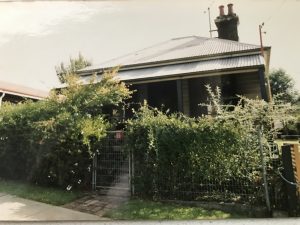 Landing back at my Bruny Island shack, Denne’s Point. 2006 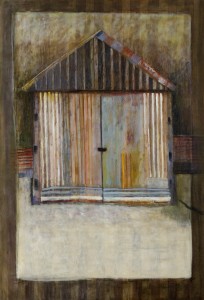 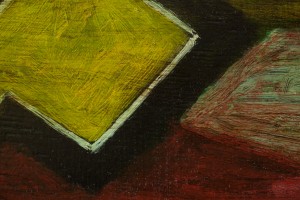 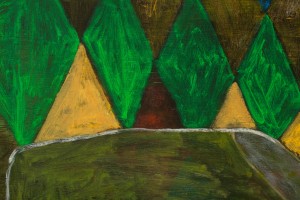 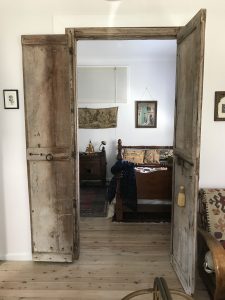 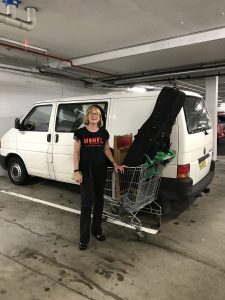 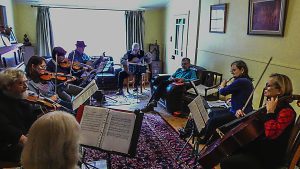 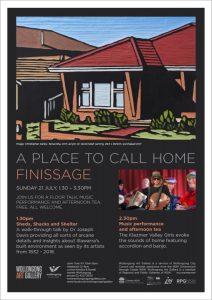 EXHIBITIONS, PUBLICATIONS, MUSIC AND OTHER PROJECTS

2016 -22  Continue to play cello in the Jamberoo and Shoalhaven music ensembles of South Coast NSW.

2019          Shortlisted for finalist’s exhibition in the Len Fox Painting Award at the Castlemaine Art Museum, Victoria.

2016 -19     Working on the Lake Walks series, paintings and assemblages: the Celtic Series: and the Industrial Bodies series, based on the Port Kembla industrial and marine environment.

2017 –    Writing a huge book based on the history of Irish families in Ireland and Australia.

2014     September till October- six weeks research and travel from the west of Scotland across to Ireland and through Ireland.

2010          Solo Exhibition Salamanca Side Space Gallery, Hobart: Bruny Island Boat Sheds: None but the lonely heart and other songs

1995     In Rare Finds group exhibition by five regional artists at the Southern Highlands Regional Art Gallery at Mossvale. Solo exhibition silent poems to be read by the eye: Romans, Réaltiés, Rêves at the Alliance Française Gallery in Canberra.

1995     September to December – scholarship to study pedagogical techniques for teaching French as another language in Australia, at the University of Jean Monnet in St Etienne, France.

1994  Finalist in Drawing on the Illawarra.  The Long Gallery, University of Wollongong.

1993     Solo exhibition: The Picton Paintings at Tapas D’espana at Darlinghurst.

1988       Represented in the University of Western Sydney collection.

2021 Presented paper/video via Zoom, at the Irish Studies Conference, held at the University of Auckland. Cadastrophe and Circumjacency: a glimpse into the role of mythology in Irish culture and colonial history.

2019  Presented paper/PowerPoint at the Irish Studies Conference, held at Flinders University, Adelaide. Kathleen and Kitty: Two women, one a painter, the other a composer and pianist, both born in the late nineteenth century, both with strong connections to Ireland.

1994   Not Surrealism: Magical Realism, Post Graduate Conference, University of Wollongong: a discourse explaining the relationship between my Master of Creative Arts’ painting presentation Pretty Still and the essays, Part.1.Wild         Flowers  and White Porcelain and Part.2.Circles and Seeds.

Represented in private/ corporate collections in Australia and internationally.

2017  COMMISSIONED ESSAY: “Behind the Scenes”; The Life. Art, Design and Community Work of Robert Bell – included in the Australian National Gallery Research Library.

2010     Article written about my work by Claire Andrews about my Bruny Island exhibition in “Tasmanian Life” magazine publication and online.

2008     Winner of a writing competition held by the ABC in Tasmania. The prize being free entry into a selection of events for “Ten Days on the Island”, and a commitment to write critiques which were published on the ABC website.

2006     Completed the essay The Nature of Things a critique of the woodblock prints of Michael Schlitz at the Bett Gallery North Hobart.

1995    Represented in the Who’s Who of Australian Visual Artists, DW Thorpe in association with NAVA.

1998  Newspaper reviews published, Extraordinary Exhibition: Holy Threads, an exhibition of Lao textiles and the art of Savandhary Vongpoothorn at the Campbelltown Regional Gallery and Black Man in a White Man’s World, an                exhibition by indigenous inmates from N.S.W. jails.

2006   Essay on woodcut prints of Michael Schlitz The Nature of Things published on the Bett Gallery website.

2016   Commissioned essay “Behind the Scenes”; The Life. Art, Design and Community Work of Robert Bell. – also to write and design on her website: www.robertabell.com.au