A Changing National Identity: ANZAC Day 2014 and Memories of My Irish Ancestors.

A Changing National Identity: Anzac Day 2014 and Memories of my Irish Ancestors.
I wonder how many descendants of Irish convicts fought for the British Empire in the Boer War and subsequent World Wars and how the issues of ethnic and cultural difference shape our nation today.

When discussing the oral transmission that has preserved the traditional, Celtic music of the British Isles, Jordi Savall[1] said:

Just as the face is the mirror of the soul, a people’s music is the reflection of the spirit of its identity, individual in origin but taking shape over time as the collective image of a cultural space that is unique and specific to that people.

This will not happen in the New World countries, such as Australia, a nation made of many cultures and races. However, the passing down of each history, be it orally, as in the case of Celtic music, or written, as Savall says:

These processes of transmission are also paths of evolution, innovation and, therefore, paths of transformation by which they undergo the diverse influences of other musical styles that are foreign, modern, or even very remote in origin, resulting in new and equally legitimate forms of interpretation.

.
“Jim” was a consciousness objector, not just a pacifist, but took action for a complex set of reasons. Terry Connolly his grandson, enjoyed a long and rich career as a Hercules pilot in the RAAF. His older brother, Jim Connolly also joined the armed forces. Ironically, he was the first Duntroon graduate to receive both the Queen’s Medal and the Sword of Honour. I remember the huge photo on the front page of The Australian. James Michael Connolly received these symbols of valour and virtue from “Sir” Paul Hasluck, the incumbent Governor General. James Connolly later played an active role in the Vietnam War, another story of chagrin, remorse and loss.
No doubt, one can assume that the father of Terry and Jim Connolly, Hilary, was the young son of Michael and Mary Connolly who did return from the killing fields of Europe. He and his brother Darrell were already graduates from Sydney Teacher’s College and had completed their high school at Holy Cross College Ryde in Sydney, continuing the Irish Catholic tradition. Like other ethnic groups in Australia, for a few generations, it is religious and cultural ties that maintain the identity of the heritage they leave behind. For some it gradually fades away. This is both a regretful loss and a healthy navigation toward a new and unified nation. Some would say it softens the “tribal” element that encourages divisiveness in a community and the wider world: the stuff of wars

.
Many of us mourn for our rich past and I for one, feel the need to dig deeply for my ancestors for that is who I am. On the other hand, it is a meshing of the elements of this historical discourse that are what the nation is today, thus the need for a lively debate at all times. Believe it or not, some of us still live in a community of humans in nature not just an “economy”. Social divisions defined by money, could also be termed “tribal” if we wish to continue this interchange, but it could become messy and embarrassing. Nonetheless, it is relevant to the discussion of fostering a healthy society.
Our national identity is in a constant state of flux, like the global village, the populations are shifting like the sand. Consequently, the national identity is part of a world-wide continuum fluctuating from its colonial underpinnings, with a first nation always there in the background and increasingly in the foreground, which ought to be respected and observed as an anchor and benchmark upon which to build a new third nation, one that is essentially restorative with respect to past ills and the destruction of the environment.
Sadly, missed by my generation, Darrell Connolly, the son of Michael [Jim] Connolly of the white feather, was the son who did not return to his antipodean home. I knew from conversations I shared with my uncle Hilary Connolly that he never recovered from this loss. My mother spoke of their closeness, the wild fights, their love for cricket, football, athletics and music. Clearly now, the photos we recovered convey their very different dispositions. Hilary was quiet, pursuing a long career as a primary school teacher and principal who in that Australian spirit of a ‘fair go’, set up a night school for parents of immigrant children in the western suburbs of Sydney, in order to facilitate their English language acquisition. Hilary maintained his love of sport throughout his life and refused to leave the house if the cricket was being transmitted on the TV.

We have a rough-cut gramophone recording of Darrell Connolly, his brother, sending his Christmas greetings to family and sweetheart describing visits to tourist spots in Canada and the US, before he departed to Europe in 1943.He has that unmistakeable voice of the mid twentieth century Australian vernacular.
I once saw the letter sent to inform his parents of the retrieval of his body from Kiel Harbour in Northern Germany. I have also seen the flying record and bombing history of both brothers, compiled by Terry Connolly, son of Hilary who was repatriated to Australia toward the end of the war.
I recently spoke to a German family whose innocent relatives were wiped out in one of these bombing raids. The aftermath of WW1, when the evil perpetrators of horror rose to power in Germany, dragging so many into abject poverty, loss, torture and death in WW2, is a time that needs to be rigorously scrutinised, because punitive action taken by the victorious allied forces might have been avoided to mitigate a possible reaction of circumstances, which ultimately lead to the rise of a psychopath. Such a stream of events leading up to and post 9/11 has led to current woes and a world frightened to look at itself and reflect, asking the question “why”?
I am essentially a pacifist, but also a realist. The cliché, “history repeats itself” echoes loudly, as avarice, inherent to human nature, prevails. While I do not glorify war in any way, and find it increasingly irritating that various Australian Prime Ministers such as John Howard and his protégé Tony Abbott continue to promote an unhealthy jingoistic nationalism as they purloin the Anzac platform to push their brand of corny, anachronistic Aussie-aussie -aussie- ism, they send the wrong message. In fact, they have completely missed the message of the Anzac legend.
The impetus that increasingly swells the crowds attending Anzac ceremonies is not about being an “Aussie”, or the tragedy of losing an inglorious battle, but rather, it is about remembering our courageous men and women who sacrificed their lives in a stupid, unknown territory, needlessly harming others of their ilk, due to the mismanagement of ignorant, arrogant, incompetent, imperialist buffoons.
How some of us cringe today as Tony Abbott brings back the medieval, nepotistic practice of peerages that go hand-in-glove with oligarchies. Can you afford one? Our PM doesn’t seem to understand the Australian people or the history of the national identity, a topic which deserves a lengthier discussion than I can afford here. We are all boat people, Mr Abbott, including you of the short memory: show some compassion.
Rather, the sacrifice of the Anzacs and all other soldiers who have fought in wars, ought to be utilised as a bench mark through which Australians are enabled to observe the positive and negative aspects of our past, honour the people of the First Nation and the war they found themselves fighting from 1788 to protect their country, and embrace a future whose principles are grounded in respect for all others and the beautiful planet that allows us to live and breathe.
I do attend the dawn service, not to glorify war, or subscribe to this new and vulgar brand of oink-oink nationalism, but to honour the memory of my beloved, strong, brave father and uncles. Even the war with the Japanese, my father’s war, was a reaction to the imperialism and racism of western, white colonial powers.
For Darrell Connolly, the more extroverted of the brothers, also brave, handsome and strong, we regret not knowing you and hope soon to visit your final resting place in Germany.
My father’s people, James McHugh and Anne Casserley, left Ireland in the 1870s, for equally dismal reasons. Their stories and those of all my ancestors and many of yours, if hailing from the continually expanding Irish diaspora, will be treated in a book I hope to complete in the near future.
Jules McCue April 2014 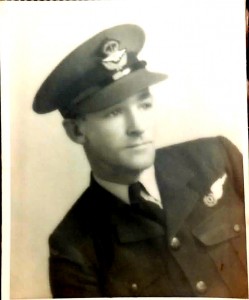 My unknown uncle, Darrell Connolly, died over Kiel Harbour on 26th August 1944, a bombardier in a Lancaster on his 11th mission with the RAF 100 Squadron. 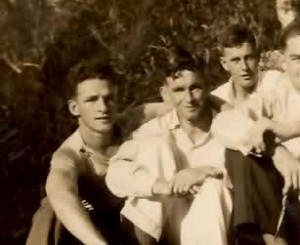 My uncles, Darrell [left] and Hilary Connolly [middle] photographed at a cricket game. Hilary served in the 77 Squadron of RAF Bomber Command as a bombardier in four-engine Halifax bombers, returning to a career in school teaching and raising a family. 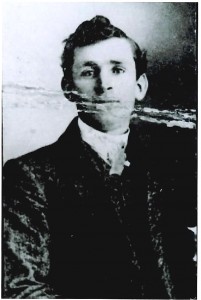 My grandfather, Michael James [Jim] Connolly, the father of Darrell and Hilary. He received a white feather whilst living in Lithgow at the time of WW1. 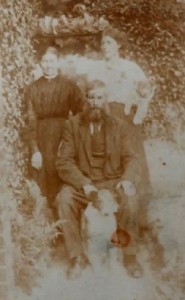 My great Grandfather Owen Connolly, great grandmother Bridget and daughter, the parents of Michael James Connolly [Jim]. He and his family [parents and sibblings of Owen] were sponsored by his ex-convict uncle Owen Smyth, “Whiteboy”, migrating at age 9 on the Commodore Perry, 1856, settling in the central west of NSW. 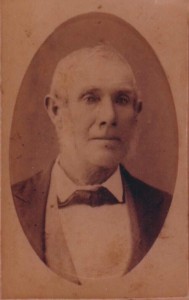 My great, great grandfather, Peter Crane, arrived as a convict from Dublin on the James Laing in 1834 and settled in Wellington, NSW. 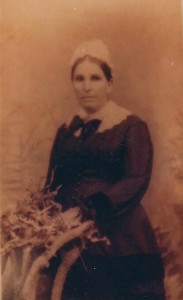 My great, great grandmother, Mary Crane nee Cassidy, arrived from Derry in 1848 on the Thetis. 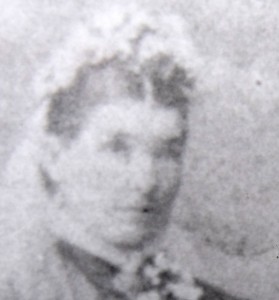 My great grandmother, Ellen Joyce, nee Crane married Stephen Joyce from Galway in 1885. After his early death, she moved from Blackheath to Thames St, Balmain, near the wharf. 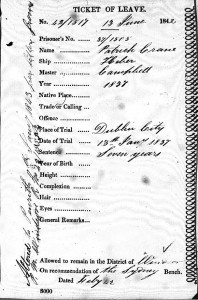 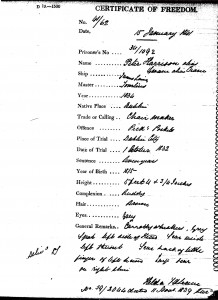