Walls [with regard to Marfa [Texas] paintings 2014

With regard to the MARFA[Texas]Paintings.

There is an element of the irreducible enigma in every work of art, and it is this irreducibility of the enigma which, even as it withdraws, asserts and exposes itself.

Here we have neither the depiction of the invisible nor an imitation of an appearance. It is the unrepresentable and the presence: the effective magic of matter as it is in itself, in its timeless existence before the image and depiction. A place of absence and of human traces, the wall is not a response as an ideal or an image would be, but in the identification of the spirit as the non-representable and of matter in all its nudity there is the persistence of the question above all else. A wall before the unknown is impenetrable, a barrier that divides. Even doors and windows, which have nothing of the indifferent object or pretext about them, and which retain all their archetypal and symbolic charge, remain closed in the walls, refusing to allow a passage through and clearly contradicting their function.

If truth, as Tapies thinks, is not to be found in the painting but behind the last door that only the effort made by the spectator allows him to cross, the contemplation of the painting is the experience of the hidden, of the obscure, of the ineffable. It is not a universal deciphering but non-knowledge as understood by mystics.

. . .Walls are the allegory of separation, the place of the eternally absolute other and of ephemeral finiteness, and reveal their condition as stelae, as vestiges, whether they give the impression of being fragments and ruins or not. [ Youssef Ishaghpour, Antoni Tapies: Works/Writing/Interviews. Ediciones Poligrafa, Barcelona, 2006. pp. 56 – 62] 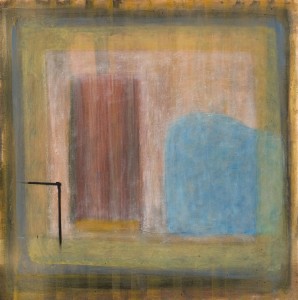 What Kant had precluded from rational and philosophical knowledge, in accordance with classic physics, was recognized by Kant himself before being proclaimed in more affirmative and exclusive manner by early Romanticism as the private domain of art, the domain of the absolute, the ineffable and the inexpressible, different from instrumental rationality yet close to the mystical enlightenment, meditation and alchemical practices of inner transmutation, regardless of any religious doctrine or even transcendence, as Tapies has always stressed. [Youssef Ishaghpour, Antoni Tapies: Works/Writing/Interviews. Ediciones Poligrafa, Barcelona, 2006. p. 86]